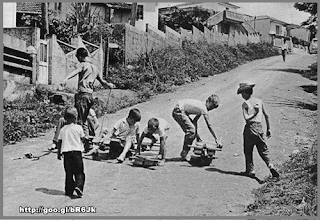 My father was born in 1919. He always took pride in saying his name, chosen by his mother. A tribute to the great British Lord who bravely fought against Napoleon in the famous battle of Trafalgar. What my father didn't know, I guess, is that the fearsome admiral was mortally injured in that battle, despite the British Navy's victory. But this doesn't matter to my father and neither to the great stories of his life.

He is ninety four years old and still sane, joyful and full of memories from his childhood, his adolescence and his adult life as a family father, musician, politician, driver and public employee. He never hid his love for the theatre, Dalva de Oliveira and Vicente Celestino . Fourth born from a family of eight men and a woman, the boy grew up doing small choirs forhis mom. His father, a small business traveller, showed up once in a while to make another baby and get the money his wife gathered from selling mocotó jelly made by herself, eggs and the chicken she raised.
My father was chosen to do the deliveries, receive the payment and give the change. He learned rapidly to calculate and was never wrong. However, if in one hand he had the responsibilities of a grown up boy, on the other he was devilish and was always getting into trouble. Back then, the punishments and the beatings were at the same level of the devilry. More than once my grandmother broke a quince stick on his back.
Desperate to educate that son, his mother asked for the Priest's special blessings, her dear friend. He gave her advices and a brilliant idea. Her son, old enough to the catechism, was going to be one of his acolytes. There went Nelson assisting the Priests latin masses, cleaning the church, helping the sick's communion, on the extreme unction of the hopeless, visiting the rural areas, making candles, funerals and so on.
My grandmother was joyful with the boy's manners and righteousness. Or she thought so. Her son kept doing his devilries, a lot cleverer now, getting rid of the punishments by blaming a younger brother or cousin for his acts. And he always succeeded. He was already a saint due to his religious activities.

There was a funeral on that day and the children wanted to know who had died. Wanted to see the dead body. My grandmother's mischiefing son did not tell what he had seen before closing the church's huge and heavy doors. He was supposed to leave just a crack open to avoid cats, dogs and other animals to get into that holy place. After all, there was a coffin, no matter how poor, and a dead woman with no family.

My father knew her to be Banguela (toothless). A woman who lived on the streets, but not because her family had abandoned her. It was her, at the age of sixteen, after losing her beloved, that also lost her wits and lived wandering through houses.

He wasn't scared of her like the other boys, all it took was her to show up on the streets and the boys vanished. That little admiral used to give her goodies and enjoyed her madness. But she was getting cranky and already dragged her legs while walking. Her knees got arched. The rotten teeth were falling. The town's dentist promised her a denture. She said it was the devil's laugh and did not accept. An ugly character to the eye.

Banguela died and they had to stretch and bind her legs to close the coffin, my father heard. An acolyte sees everything. As usually happened, at the sunset the children got together in the church's square. They wanted to see who had died. They waited until the night came. To prove their courage, they gambled, and a few went to see the dead. After they overcame the difficulty to push those heavy and noisy doors, they set course to the candles.

They needed to open the coffin. With their little shaky hands they managed to set loose the screws. And then the dreadful happened.      Banguela's loose kneesbentand, with a singlestrike,threw the coffin's lid to one side whileher body fell on the other. The children were crying, screaming and running away.

As my father says, a few still running to this day.